The emotas CANopen DeviceExplorer is a versatile CANopen master tool for development, testing, diagnostics and service tasks. It provides CANopen master functionalities and allows the analysis and configuration of CANopen devices using a supported PC CAN bus adapter or interface.

Information about each CANopen device is read from the electronic data sheet of the device, or they can be scanned directly from the device. Using standardized device configuration files (DCF) device configurations can be saved or imported. Additionally, data of entire CANopen networks can be stored in project files. The built-in scripting capability using QtScript allows users to create their own test and control applications with only little effort.

CANopen Device Explorer can be purchased together with an EMS. Dr. Thomas Wuensche CPC-USB/ARM7 or CPC-USB/embedded USB CAN Bus Adapter here when the "Buy Now" button is visible:

For PCI Express, Ethernet interfacing and other requirements, please contact us with your CANopen Device Explorer purchase requirements and we will be happy to help you in-person.

For in-person sales and technical assistance, please contact us. 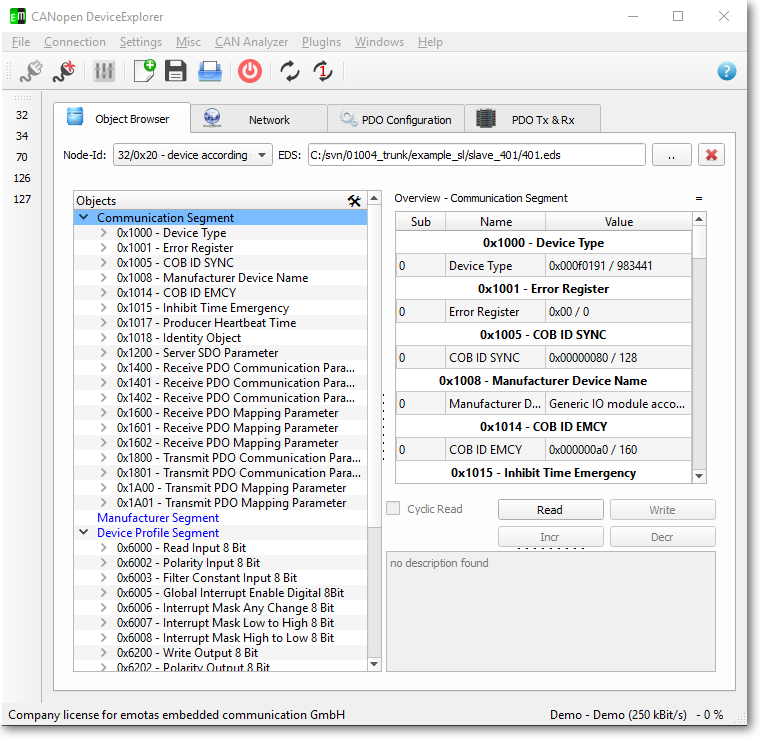 Objects of a device are presented in a clearly arranged object browser. Access to each object – according to the access rights – is given for reading and writing. The CANopen DeviceExplorer supports all SDO services. Values of the objects can be displayed decimal, hexadecimal, binary or in ASCII format, depending on the data type. Large data, like domain blocks, can be read directly from – or written to files.

The CANopen DeviceExplorer supports the simple configuration of the the PDO mapping by drag&drop function. PDOs can be sent, received and viasualized with a single click. The SYNC message for sending of cycle PDOs can be sent once or cyclic for the purpose of tests or diagnosis.

Due to the scripting capability of the CANopen DeviceExplorer it is possible to adjust the surface and masks of the tool to customer specific needs. So it is possible to include a mask for service use with the optional Scripting PlugIn. Following PlugIns are available:

The CANopen DeviceExplorer can also connect via TCP/IP to a CANopen-TCP/IP Gateway according to CiA 309-3. Using such a connection the majority of the CANopen functions can be used, but raw CAN view is not possible.